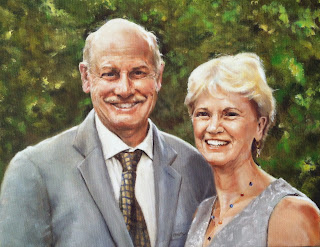 I know I keep saying what an honor and whatta treat is to do this and that, but it's really the truth. This portrait is of Bob and Sandra Jensen given on the occasion of Bob retiring as Dean of the Fullerton College Art Department. I was commissioned by the Fine Art Department to do this piece and worked with Sandra on selecting the reference photo and painting size (so it wouldn't be too big to fit in their house). In an art department filled with terrific artists it is really something to have been selected to do this portrait. I got to know Bob while doing the dishes with him after a faculty party and he's quite a great guy... and behind every great man is a great woman, so I genuinely enjoyed doing this piece. I don't usually frame stuff, but since this was a surprise and to be presented at a retirement dinner it needed to be framed. Tim at Leon Picture Frames in Anaheim framed all the paintings for the Fullerton College "Hall of Fame" and Bob had picked those frames, so we did this one in the same style that he picked for the campus library. It really sets off the painting. The presentation went well and everyone seemed happy. At the end of the night Bob & Sandy loaded all their gifts in their truck, but this one went on top.

Posted by maestrejuan at 10:39 PM No comments: 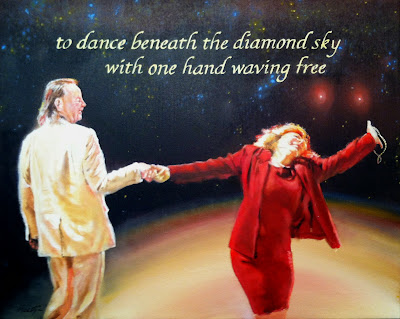 I really enjoy portraits. Some portraits are very formal and some are very fun. I was very happy to get this gig. Ken Rhoads commissioned this 16" X 20" oil painting as a surprise gift for his wife Becky's birthday. Ken emailed this dyamic (but low-res) image to me as a reference photo. I've had to work from some pretty poor images, once from a 1920s newspaper photo, and they pose some real challenges. Ultimately you have to shift your approach away from any detail and focus on overall gesture. I've had two opportunities to portray Becky (who is one of my all time favorite people) and sadly both have been from poor reference pictures (see "The Rehearsal").  One of these days that will have to get corrected.
Ken also wanted this lyric from Mr. Tambourine Man to be included someway. I don't do this kind of thing very often, although a lot of the great artists do. I do include a lot of lettering in street scenes and race car sponsor stuff over compound curves, so I'm not bothered by lettering, but typically I'm copying something that already exists. Here I get to figure out the font, the color, the placing and spacing of the whole thing. It needed to be elegant but not a hard-to-read script, big enough to read from a distance but not so big as to overpower the image. Painting is problem solving. I liked this combo and Ken supported my decisions with glowing reviews.

Posted by maestrejuan at 9:37 PM No comments: