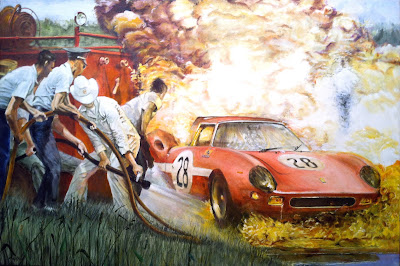 This painting is for Rod Drew of Francorchamps America in Costa Mesa. It is Ferrari 250LM (5149) burning at Sebring. This is the first 250LM and really the only one to actually have a 250 engine, the others sporting a larger 275 version. It was originally shown at the Paris, London and Brussels car shows, then campaigned by Chinetti's N.A.R.T. team, where it didn't fair very well. After four race entries its career ended here at Sebring. It was rebuilt and eventually converted to street use, then burned again! Years later the car was reconstructed from the remains which are said to include the engine, transaxle and other significant parts. The car went through other owners and eventually made its way back to the Chinetti family.

Rod had done extensive work on this car sometime back and seems to enjoy seeing it presented this way. He has been after me to do a painting of the car burning for quite some time, suggesting Tom Burnside's wonderful period photograph as a starting point and insisting the guy with the cowboy hat be included. I added other figures to photos of the reconstructed car I shot while back east last year and came up with this.

This is a glazed painting, 24” X 36” oil on canvas. I did a lot of research for this piece, even going back and finding period pictures of the logos for Sebring firefighters back in the day. I did one color study of oil fire and one of firemen, since I wanted to make up most of the guys. I was happy to have photographs of the real car that I had taken recently, and found many detail differences from the car today and as it was then. Like all Ferraris from the 40s through 60s, this one is unique, and doing the research to present it as it raced on March 21, 1964 was a blast.
Posted by maestrejuan at 5:52 PM No comments: