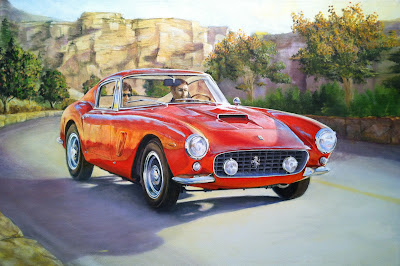 This one started several months ago when Charles Betz approached me with an idea. He and his business partner Fred Peters have sponsored an award every year at the Ferrari Club of America National Meet for the last ten years and were ready to try something other than the traditional bronze statue. The award is given to a car that is driven regularly, not a garage queen. Chas thought a painting that reflected a driving experience would be appropriate. It would be printed in a series of ten and one given out each year for the next decade. So I started some sketches based on our conversations and did a couple oil color studies to get capture what he had in mind. Eventually we got there and then set up an evening light photo shoot of his 250GT short wheelbase berlinetta. We then picked the right shot, the right proportions for the painting and had Leon Picture Frames make me a canvas.

Everything flowed smoothly, largely because of the groundwork that was laid. I gave Chas periodic photo updates by email and he made suggestions as necessary. The painting was ready on time and subject to approval by Fred and Brooke, which went well. Then off to get the prints made. I use Stan Nishikawa in Irvine. We decided that the actual award would be a bit smaller than the original so I went over everything with Stan who then did a digital capture and set out to do the color correction. In a few days we were back at Stan's to check the proofs he made available and make a selection. A few days later we had the finished prints and took them back for titling and signing. Each one got the quote "The best Ferrari is the one that is driven" in keeping with the trophy theme and was numbered 1 through 10. From there we were back to Leon Picture Frames to pick matting, frame and that ultra clear museum glass. Chas had a brass plaque made so a window was cut in the mat for it and it turned out beautifully.

Then came the FCA National Meet. Every year it's in a different location and this time it was held in Palm Springs. The recipient of the award isn't picked by Betz and Peters, they just sponsor it. The FCA judges picked Ken and Dayle Roath who has driven his 250 Europa in two recent Mille Miglias. That's a thousand miles each time, hard to do more miles than that, plus his usual driving. I have got to know Ken a bit in the last year or so and I'm delighted to know my work is on their wall.
Posted by maestrejuan at 2:57 PM No comments: