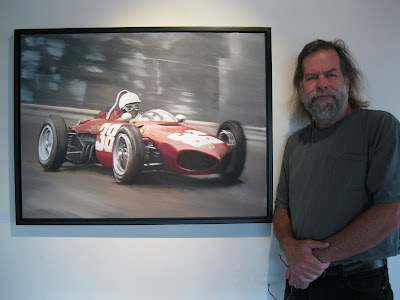 I was recently invited to participate in a show called "Speed" curated by Jeannie Denholm. The show was at the House of Balsamico in Irvine and was exhibited to private audiences during September and October. Jeannie picked four pieces for display and I created a new piece specifically for the theme. One piece, "Targa", was borrowed from the collection of Lee and Lynn Dudacek; while three others "Access", "Norm" and "TRC" were loaned from the collection of Jason Parr. My sincere thanks go to them for making these available for this show. 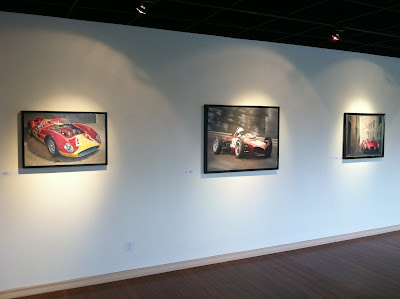 The fifth piece, "Sharknose" was painted specifically for the show and made its public debut there. This was based on a charcoal piece I had done almost twenty years ago, and it came to mind almost immediately after hearing the theme for the show. 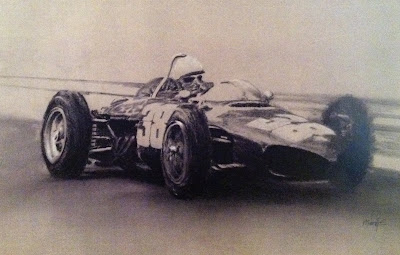 This is Phil Hill at Monaco in 1961, the year he became the Formula One World Champion. I've never determined what made the front wheels shimmy this way, it must just be a nanosecond of wheel jerk that drivers corrected for intuitively lap after lap in these tests of concentration. But that is what made this image so attractive to me and what came to mind when thinking of "Speed". 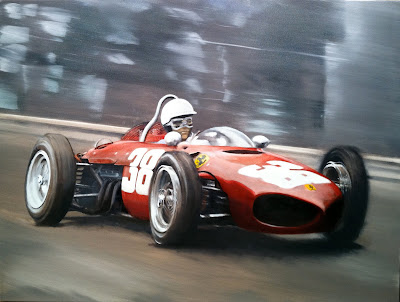 Posted by maestrejuan at 4:57 PM No comments: