I’ve been doing a lot of paintings of people at work and constructed this view of Angels Baseball. Last year (2010) I went to a ball game late in the season. I enjoyed a walk around the stadium and checked out vantage points from all over the place. While in the nose bleed section I saw this great little cubby hole of activity near the dugout. So when the new season started I got on StubHub, looked for the appropriate seats and shot a few roles of film above this little scene.

In the center is the head coach who orchestrates everything around him, coaches, players, staff, media and at base, the fans; all going about their duties somewhat anonymously. Going clockwise we see the coaching staff, a player, and the ball boys, part of the staff. I particularly like the cameramen; broadcast, print and social media. The social media guy being a crossover between fan and journalist. Then a variety of fans. Note the ball boy tossing the ball back to the stat guy, the kid in the front row hoping it will get to him.
I call it "The Hub". 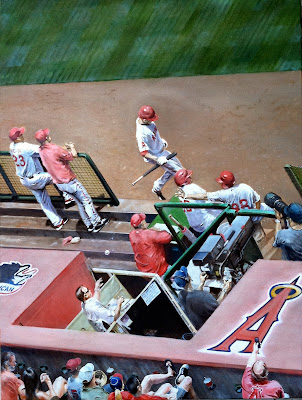 Posted by maestrejuan at 5:22 PM No comments: