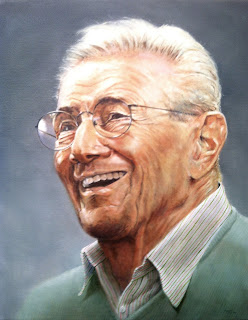 The latest portrait is of Leon Leyson. I never had the pleasure of meeting him, but many friends have seen him talk at Fullerton College about life and being a holocaust survivor. Leon was the youngest worker saved by Oskar Schindler and his story was portrayed in the movie Schindler's List. Everyone who has seen him lecture mentions how moved they were and what a great guy he is. Fullerton College is honoring him at this year's commencement ceremony and then the portrait will hang somewhere on campus.
The reference photo was taken by McKenzi Taylor and it has elements I like to work with; it is crystal clear, has strong lighting and captures a great expression. I changed the coloring a bit and narrowed the depth of field. I also got wind that he was a wood shop teacher, so I put him in a Penny's kind of wardrobe instead of a suit. This was a real treat to paint and I hope his family finds his positive qualities in the painting.
Posted by maestrejuan at 10:27 AM No comments: 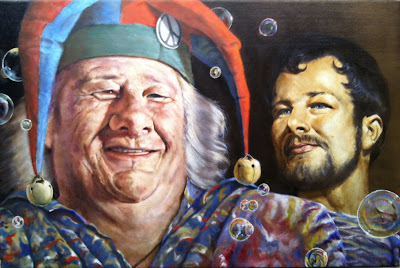 Scott Gladden turned me on to the Wavy Gravy (a.k.a. Hugh Romney) documentary Saint Misbehavin' and I loved it. Deb and I took a trip to the Mendicino area for no apparent reason and it turned out to be the home of Wavy's Camp Winnarainbow. This was followed by the opportunity to see him tell stories at the Marsh Theater in Berkeley where we each got to spend some one-on-one time with him before the show. So the reason for the trip became apparent; it was a Wavy Gravy trip. He's such the real deal, so sincere and thoroughly himself with a background as deep as a well.
When I first saw the documentary I was blown away by the photographs taken by Barry Feinstein and immediately wanted to do something with them. It turns out that this year there will be a benefit concert and auction for Camp Winnarainbow and I started working with Assistant Director Timmy Yuen on a portrait of Wavy for the benefit. I did a sketch based on my my first impulse and sent it to Timmy who got the okay to use the Feinstein image.
The sketch was very close to the finished composition. I tried to incorporate different aspects of Wavy's journey, from beat poet to prankster, activist to clown. This suggested two images of him, the young one with cherubic curls looking admiringly at the robust philanthropist he was destined to become. Progress was rapid because (a) I don't have a lot of work right now and (b) I had new Hendrix to listen to while working. Such a colorful guy got a ton of color worked into the skin. The bubbles are sort of a universal equalizer, everyone is amazed at bubbles and they help him in his work. Frank Lisciandro suggested the Peace sign, couldn't believe there wasn't one in the original sketch. I made up the jester hat, but Wavy admitted to having about two hundred hats ("follically impaired people have many hats") and oddly this one seemed familiar to him.

Deborah made a donation to the cause and presented Wavy with this beautiful clown painting. You could see Wavy melt and described it as "sweet". Jaharana gushed, saying if she saw it in a gallery she'd be sure Wavy would see it, it's just the kind of thing he loves.

Everyone was so nice and appreciative. Jaharana swooned at the image of Hugh from the 50s, "...ohh, that's the man I married". Wavy pointed to the current image and said "and that's the guy you're stuck with." It was a great meeting followed by a full tour of the house, brimming with art and memorabilia. Wavy provided stories behind each interesting object.
Wavy and Jaharana lead a full and busy life; their attachment and devotion to each other immediately jumps out at you. Fundraising seems to be 24-7 for them and an energetic staff. The time on stage might be the only time they can relax. The positive work they do for charitable causes, particularly Camp Winnarainbow and SEVA, has really moved us and we're delighted to play a small role in their success.

P.S. Both our pieces sold. Apparently Jaharana had mentioned that she was so "touched by how much it (the painting) reminded her of the man she married" to someone who is considered a "very dear friend of the camp" who bought the painting and promptly gifted it to Jaharana. This thrilled me to no end. I so wanted the painting to remain a part of their collection, but I also wanted it to raise money for the scholarship fund. This is success on all levels, everybody wins.

Posted by maestrejuan at 10:10 PM No comments: