Well, the Open Studio was a huge success. There was a steady flow of folks all day, nearly a hundred visitors in four hours. It was fun to see people with common interests meet for the first time and the reuniting of those who hadn't seen each other in too long a time. I hadn't seen Ken and Veronica Kusudo in twenty years! 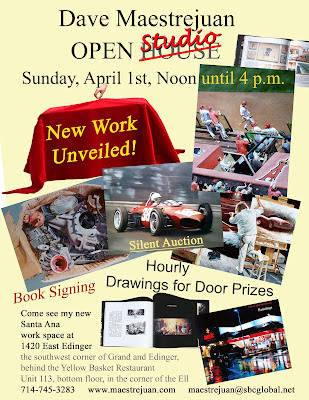 I can paint, but I'm no good at the food thing, all I could think of serving was a case of Coke and a 50# bag of oats. Food stores are so foreign to me, I don't know what most of the stuff is, I'm just looking for products from Celebrity Apprentice; so Deborah provided the selection of cheeses and snacks to satisfy people's culinary needs. People left with more than full stomachs. A lot of books and prints were sold and there were hourly door prizes. The winners of signed original prints were Barbara and Dick Gladden, Russ Wicks, Cesar Duran and Kelly Capps. 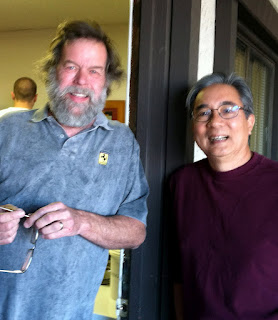 Friends from Brea, Fullerton College, the Ferrari Clubs, clients, buddies, family and everyone else all provided a huge base of support for me. A million thanks!

Posted by maestrejuan at 4:43 PM No comments: 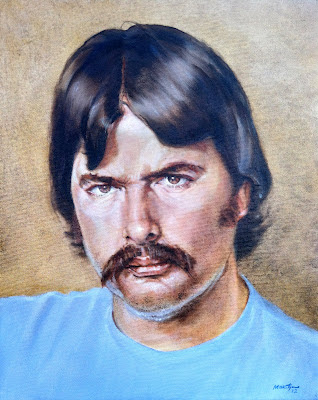 Deb and I went to visit Mark in January. He had been sick and in and out of the Reno hospital for a year and a half. I had seen him a few months ago but now he was home and I wanted to see him there. He looked better on the second day and although he was skinny as a rail, his face was full and his hair was white and bushy like Mark Twain. The next day he went back in the hospital and about the time we got home he had passed away. While there we looked at the family photos in the room. His wife Carleen pointed out a photo (taken by Skip Waller) that she loved. It was taken about the time the two of them met and (important to me) shot in natural light. I wanted to do his portrait from this picture and Skip gave the okay. Scott Faris suggested the painting be titled "the Warden".I spent the next several weeks looking carefully at the picture and focusing thoughts about Mark, getting completely lost in the work and going on autopilot a lot of the time. Working from a great photo helps, but knowing the subject intimately takes it all to a different level; one where you don't need conscious thought, just intuition. I tried to make it look like there was a grin under the scowl, which was often the case with him, and found the smile in his eyes, not so much the mouth.It turned out to be a great way to deal with the loss and I got this painting out of it, which we then delivered to Carleen. She sent a note which read in part "You captured Mark’s eyes! His eyes had gold flecks in them when he was young, and they showed up in the painting. " I'd have missed that detail if I was looking. It's like other paintings were training and here I had to operate blindfolded, drowned in music and misery and see what comes out at the end of the day. I am really pleased with the results, for me it transcends illustration and borders on art.

Posted by maestrejuan at 10:43 AM No comments: