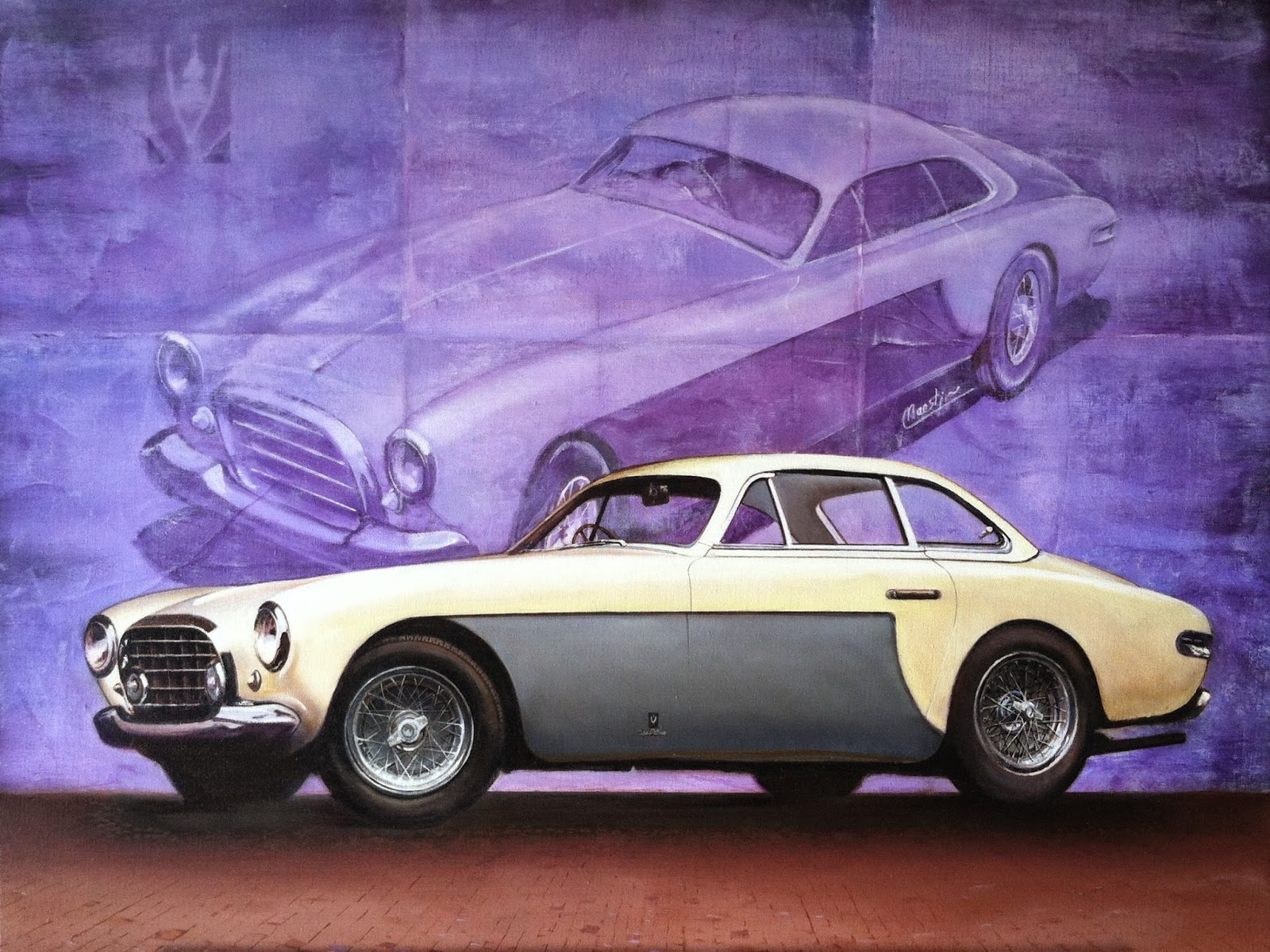 This painting was done for Charals Haagen, owner of this terrific Ferrari 212. It is chassis number 219EL and built in 1952. While working for Carrozzeria Vignale in Turin, designer Giovanni Michelotti would do these fabulous renderings of exotic shapes and they would be interpreted by Vignale's craftsmen into three dimensional form. Vignale labelled this car "Tipo Latino" for reasons beyond my knowledge.
I have followed this car around for almost thirty years and have a ton of reference shots of it from when Paul Forbes had it. There are so many unique features and this is one of the few cars remaining today that still have original paint and interior. This is not the product of what a restorer thinks it should look like, but actually the way it was designed and built 62 years ago.
Here I  did my best to emulate Michelotti's drawing style in the background. Then the actual car is presented in full color if front of the rendering on old blueprint type paper. The car is pale yellow with grey side panels. Although very unusual (and doesn't sound that great on paper) it is strikingly beautiful in person. Italians historically have a brilliant sense of design and color.
I just love this thing and was delighted when Charals asked me to do its portrait. We were introduced by Steve Beckman many years ago and that resulted in Charals buying my original painting "Obsessed". Since then ideas have been percolating in our brains and this is what finally came to boil. Tipo Latino in oil.

Posted by maestrejuan at 8:54 PM No comments: 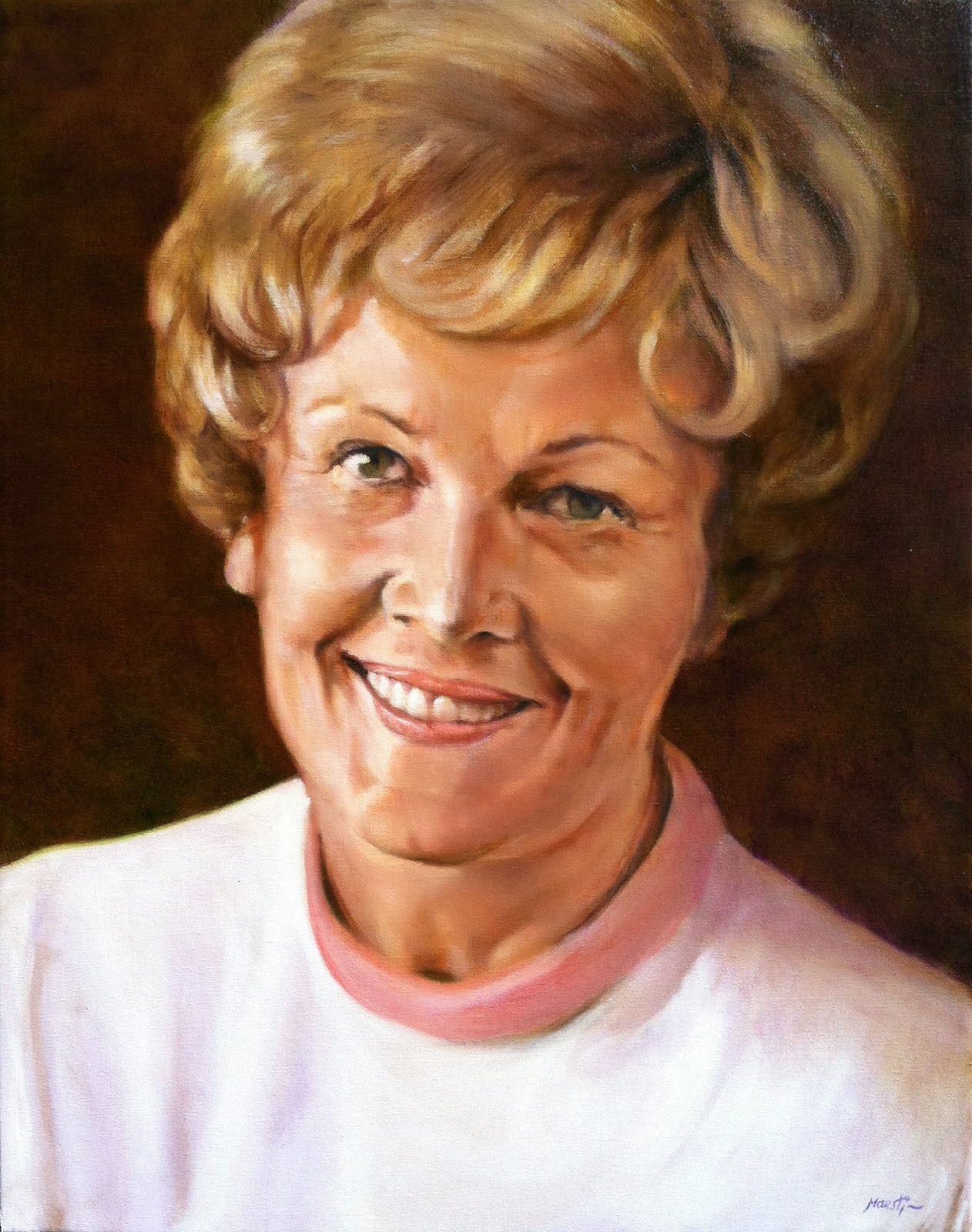 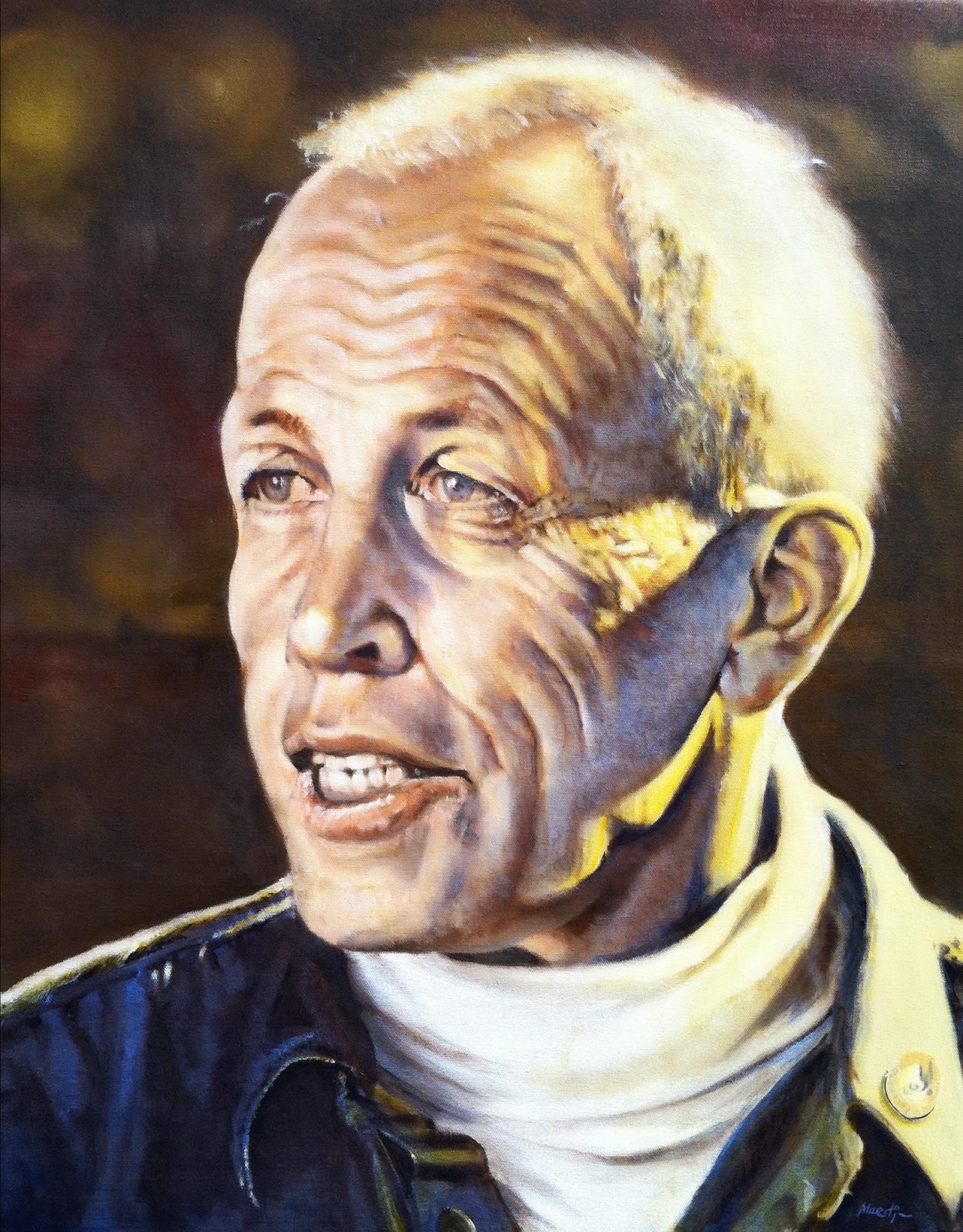 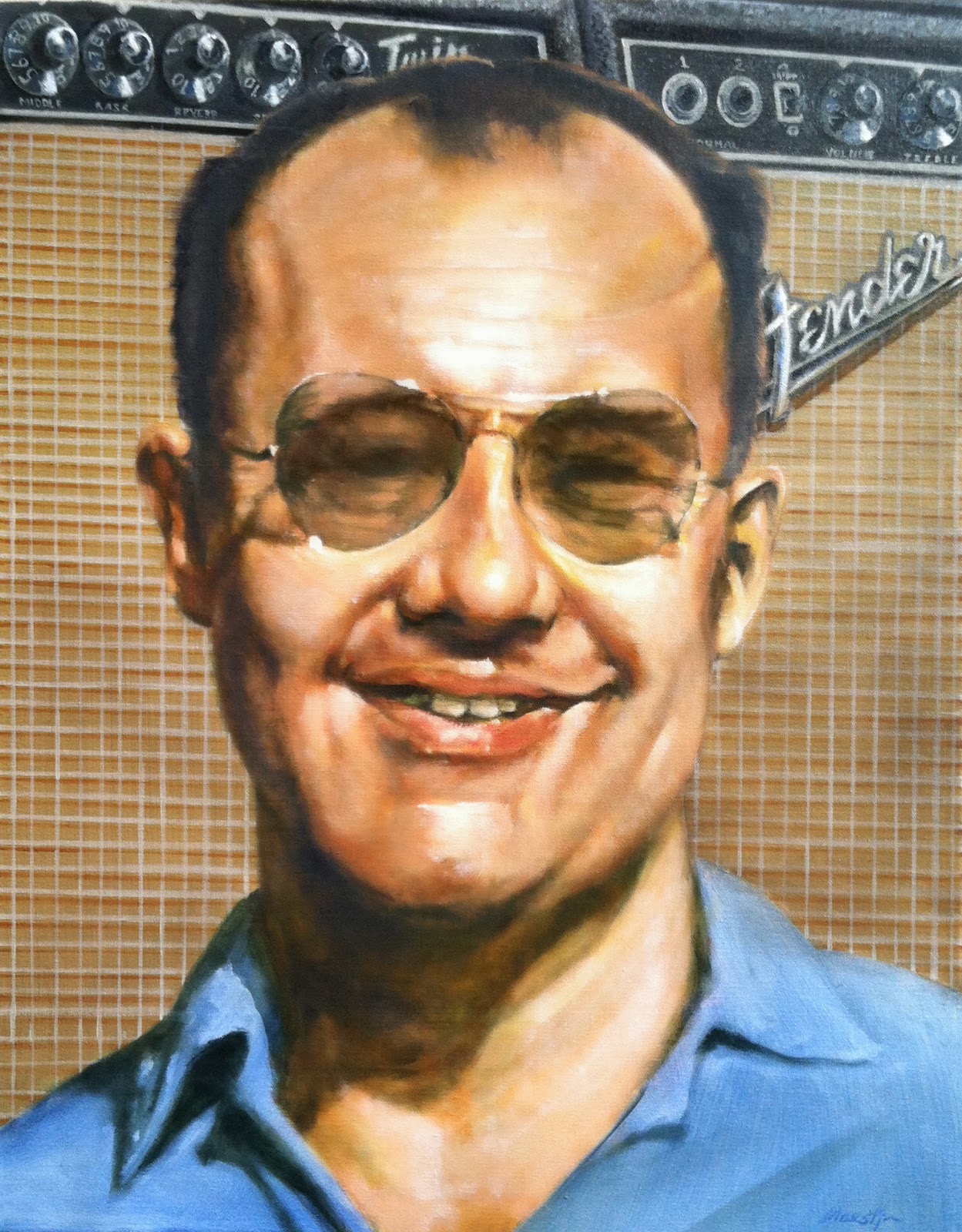 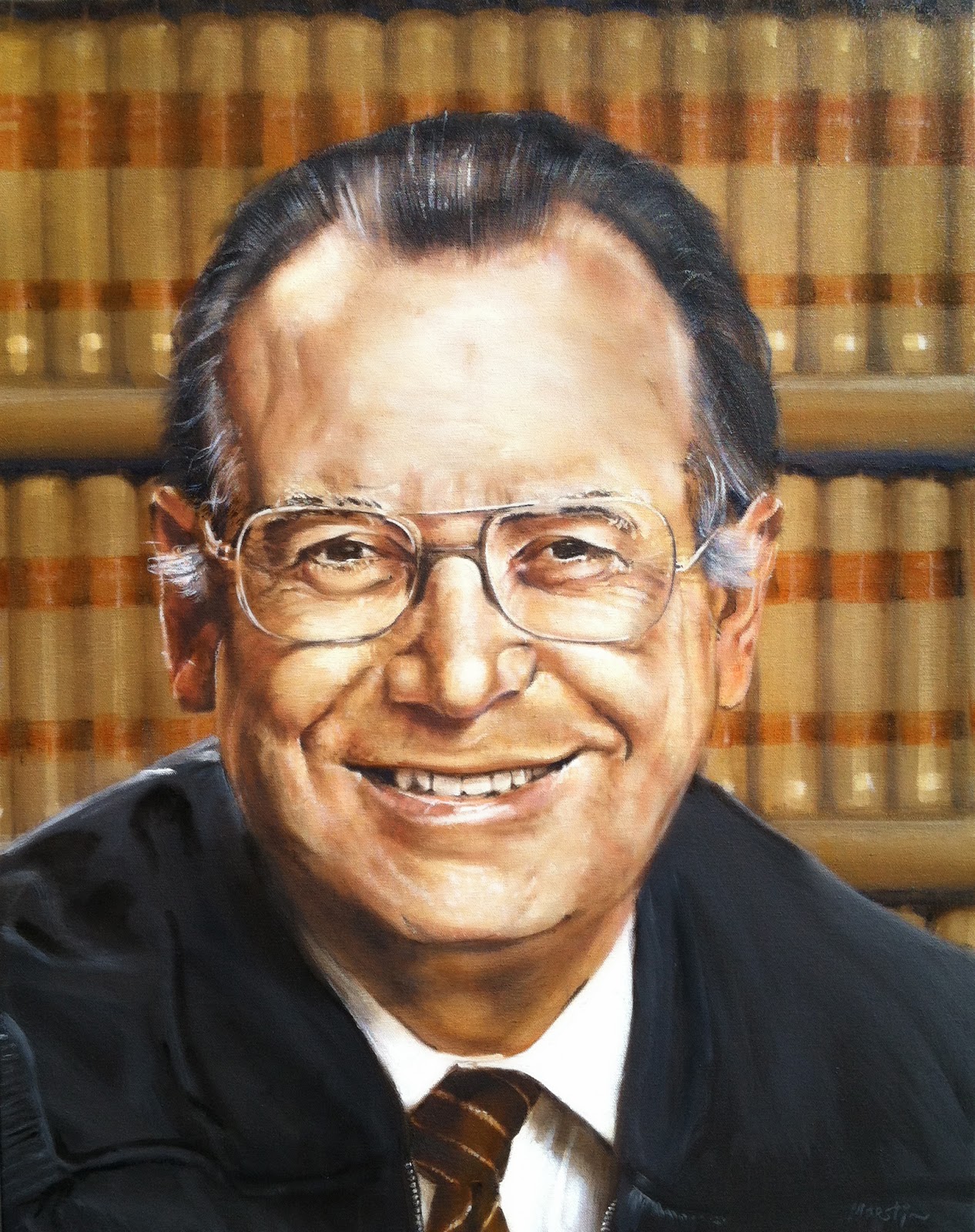 "Fullerton College Art Gallery presents Art Legends 2014. The Art Department celebrates the Fullerton College Centennial by inviting back alumni and former faculty who have made an impact in the art world." That's what the announcement says. Lo and behold, I'm on the list and my work is on the wall with some real heavy hitters. Whatta treat!

Back in the day, as a teenager, I went to LA Art Center and then took classes at UCI and then on to Fullerton College to use up the rest of my scholarship money. Scott Drake used to drive me to school because I was usually under the influence by class time. We took Don Treadway's life sculpture class at 9 a.m. (the first college class Don taught), he's in the Legend show too. Also took other classes and not sure how I got home.

Jump ahead a few decades and I decided to go back to school for art classes. I looked around and found Fullerton College still had the best art program and took up residence there for several years, learning skills and earning accolades. As an aside, its there I met Deborah Davidson, the best art teacher I've ever encountered. She is a BIG reason people succeed at Fullerton and deserves the title of legend as one of the only faculty who is a working artist and as a former student. I am honored to be considered her peer in this show.

The opening party was terrific, everywhere you looked was a prominent figure in art. Nixon Borah, cousin Justin Sweet, Kate Johnson, Jon Gothold, its a long list. There was music and BBQ and of course the art exhibit in the gallery was beautifully done by Carol Henke.

While growing up in Brea I was surrounded by artists of all ilk. Superb musicians were all around us. Scott Gladden, Bill Jacobi, Broc Smith and I were all into drawing and painting. Scott Drake and Ken Ford were masters in ceramics. Jon Bush found success by going into glass. We had quite a little cult of creators and all shared in each others journey. Not everybody chose to go to school, but the ones who did were prominently recognized in this exhibit and I'm honored to be one of the crew.

Posted by maestrejuan at 2:05 PM No comments: